We need a new generation of political leaders 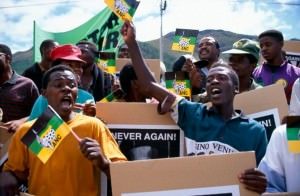 “Celebrating 20 years of democracy” what is the first thing that comes to mind when you hear these words? Well I’m sure we all know the answer to that one, POLITICS!

In the next few weeks we have elections coming up so we all know politicians will be making all sorts of promises they might never fulfill, reminding us of where we come from and well merely pointing out each other’s faults and flaws. Truth be told we need new blood in politics with new ideas and ideologies to take South Africa forward. The struggle titans that emerged in the apartheid era fought selflessly for us to be living in the South Africa that we are living in today. The struggle we are facing today is different from that of prior democracy therefore WE NEED A NEW GENERATION OF POLITICAL LEADERS. As much as the new generation is needed in the political system of this country we need the older generation as much, “indlela ibuzwa kwabaphambili” lightly translated the way forward is asked from those in front or from those who are already there.

The issues and struggles we are facing today are way different from those of yester years so therefore need another approach to tackle them. Whenever we are not happy about something whether it is service delivery, wage or salary increase, what do we do? We strike or “sishaya itoyitoyi” famously known as toyi toying, don’t you think we need another approach to getting our voices heard? Our leaders are on the forefront of those marches, some would say its tradition but we need another approach to it. Hence we come back to the leaders, that’s the strategy they used back then worked well for them but in the modern era it’s not working now. We need new POLITICAL LEADERS with new ideas, ideologies, strategies because the struggle has changed.

I really thought the new political on the block EFF was coming with new ideas since their leader is young, I thought he would come with a different approach compared to these political parties but they are too militant . All these so called political parties are not bringing anything new on the table except tell us what we already know, so we definitely need new and young political leaders. The youth is the majority in SA and the youth and they are most frustrated by this whole unemployment saga. I don’t think any political leader appeals to the youth they are supposed to, probably because they do not understand the real issues the youth are facing.

New leaders, new ideas, ethics to sweep all the corruption and incompetency in the government and its different departments, and introduce the country to a new era, an era of unity. young people need to get more involved in politics to breed a new generation of political leaders because at the end of the day the youth is the future of SOUTH AFRICA.

This entry was posted in Facts Only. Bookmark the permalink.

3 Responses to "We need a new generation of political leaders"