Why Every Man Needs To Accept The Size Of His Penis 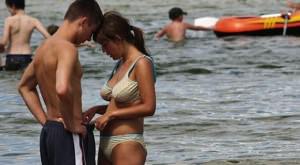 If you’re anxiously reading this article, you may already have it.

Oh, relax. It’s not a johnson-shrinking virus. “Small penis syndrome” is a psychological condition in which a man thinks his manhood is too small, even though he’s really on par with the rest of mankind.

Is my penis size normal? That age-old question was addressed by British researchers in a recent study published in BJU International. Their findings, in a nutshell (or two): 63 percent of men complained of having inferior hardware—but none of them was smaller than normal!

What is the average penis size? Measuring erect, between 5.5 and 6.2 inches long and 4.7 to 5.1 inches around—and don’t even think about measuring at your desk.

Does penis size matter to women? If you’re still worried, consider that 85 percent of women reported they were happy with their partner’s size.

Okay, British researchers are one thing. But what do women in South Africa think about penis size and what do they think think is the ideal penis size?

We asked two of the A.M.B Girls (Chantelle and Didi)  for their take on penis size.

“Yes, we care about the size of a man’s penis,” Chantelle says. “But when it comes to sexual satisfaction, it’s pretty far down on our list of priorities.

Do women like big penises? Not necessarily. Large penises don’t equal an instant orgasm.  “Women find it difficult to orgasm, and oral sex and hand stimulation are often more effective, as are vibrators,” she says. “It’s not personal—it’s just how some women’s bodies work i think.”

The biggest problem with large penises, the women say, is that they’re often attached to even bigger dicks.

“There’s nothing worse than a guy who thinks he has a HUGE penis and is therefore God’s gift to the ladies,” Chantelle says. “That kind of guy thinks that getting an erection is pretty much all the effort he has to put into sex. The chances that the women he sleeps with are having orgasms? Slim to none.”

“Usually when women complain about a small penis, it’s also that they’re not having orgasms,” Didi says. “If they’re orgasming, it’ll matter a hell of a lot less what size your penis is.”

Nna I know that pressing instead of thrusting in missionary position, or trying woman-on-top does wonders if the man is not that gifted, but the doggy style must be avoided at all costs if the penis is small, especially when a woman has a bit butt like me

So there you have it gents, if you know that you’re not that gifted you need to master positions that are going to assist you.

The British research (really just a review of previous studies) confirmed that women do indeed prefer a thick penis. The reason: The greatest number of nerve endings are in the lowest part of the vagina,. “So when a thick penis pushes against the labia and lower vaginal walls, it provides intense, pleasurable sensation.

“But men with thinner penises can provide a similar experience by penetrating in the positions described above or moving his hips in a circular motion while thrusting.”

Why are men so worried about penis size? Part of the reason is pornography—21st century man has seen plenty of prodigious penises on his screen. Most women don’t want that.

A lot of men compare themselves to something they see in adult material. They haven’t seen another man’s penis up close

“Men only see themselves, and look at a different angle than women—looking down.”

In other words: Your penis looks bigger to women than it does to you

The irony is that men spend so much time thinking about their anatomy when they should be thinking about hers. “It’s a man’s knowledge of female anatomy and ability to stimulate a woman in all the right ways that determines whether or not we’re happy in bed

And finally, guess what really matters? Love…as long as the love is there, a lot of things can be worked on.

This entry was posted in THE FIX. Bookmark the permalink.